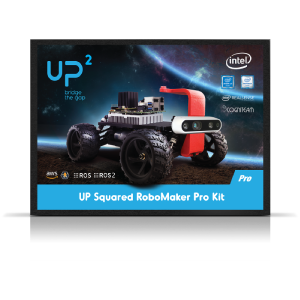 Across the world, industries, businesses and even governments are continually looking to leverage AI and cloud computing to help automate services and tasks. One solution which is gaining increasing interest among developers are Autonomous Mobile Robots (AMRs). AMRs offer one of the greatest opportunities for growth in factory automation, with the market expected to exceed $16 billion globally by 2026, with a growth rate of approximately 14 percent[1].

These innovative machines can be set to perform a range of tasks from cleaning facilities, retrieving objects in warehouses, exploring outdoor environments, and interacting with people in a variety of ways. However, independent development of AMR applications require knowledge in integrating AI, machine vision and robotics, making for a lengthy and complex undertaking, not to mention the time and money required to obtain the necessary skills.

The UP Squared RoboMaker Pro Kit is designed to help developers of AMRs get a jump start on their projects. Developers don’t need to develop every aspect of hardware, software and networking and can quickly get started on their projects. By leveraging readily available components and technology, the UP Squared RoboMaker Pro Kit provides a short cut to dealing with the challenges of AMR development.

Designing and deploying AMRs presents several key challenges which can be daunting to overcome individually. With UP Squared RoboMaker Pro Kit, AMR projects benefit from having these and other challenges already addressed before you open the box.

To operate effectively, an AMR needs the capability to view its surroundings in 3D and make decisions autonomously based on this analysis. Testing and developing these capabilities can be a daunting and slow process without the right tools. UP Squared RoboMaker Pro Kit includes the innovative Intel® RealSense™ depth camera to provide accurate, 3D vision. By utilizing AWS RoboMaker services, developers also have access to open-source ROS packages to help build applications quickly, and run simulations in virtual environments to train their AI models before deploying a single prototype.

Robot Fleet Management
Many AMR applications require the use of more than one machine operating in an area, with some application seeing dozens of AMRs operating together. With so many machines operating simultaneously, communication and management of units is vital to prevent collisions, maintain smooth movement, and avoid duplication of individually assigned tasks. By utilizing AWS Greengrass and cloud services, fleet management and communication is easy and effective for the UP Squared RoboMaker Pro Kit.

Robotic Controller Integration
AMRs require integrating components to provide a robot with vision, computing, communication and movement. This means connecting many different parts such as cameras, processors, AI units, and motors in order to allow the AMR to perform its tasks efficiently. Finding the right parts with shared compatibility can often be a difficult and unclear task. With the UP Squared RoboMaker Pro Kit, these parts are already sourced, integrated, and guaranteed to work together.

In addition to helping developers overcome the challenges of creating and deploying AMRs, UP Squared RoboMaker Pro Kit provides several key advantages to power their applications.

Quick Development
With the UP Squared RoboMaker pro Kit, developers can quickly build a demo or proof-of-concept (POC) right out of the box, with all the necessary parts from hardware to software and even motors and wheels. Users can create a machine vision application in hours and a working demo in only a few days.

Scalability
UP Squared RoboMaker Pro Kit provides all the necessary tools, through cloud services and simulation training, to help developers quickly scale up from POC to full production. From the UP Squared Board to the Cogniteam motor control board, every piece of the kit is designed to work at every level of project development.

Intelligent Simulation-to-reality
UP Squared RoboMaker Pro Kit gives developers access to cloud-based simulation environment thanks to integration with AWS RoboMaker. By replacing physical tests, robotic applications and algorithms can be optimized in a virtual environment, and then easily loaded onto the physical robots.

Low Power AI Acceleration
UP Squared RoboMaker Pro Kit includes the Intel® Movidius® Myriad™ X VPU, powering on-device AI inference for applications such as mapping; object detection, classification and avoidance; as well as autonomous routing and decision making. The UP Squared RoboMaker Pro Kit is compatible with the Intel® Distribution of OpenVINO™ toolkit, and can perform load balancing to optimize performance while operating at less than 25W of power.

Simplified Fleet Management
AWS IoT Greengrass provides simple and easy to use controls for managing a fleet of hundreds or even thousands of robots, including fleet synchronization, updating AI models, and lifecycle management.

Ready to Go Applications
UP Squared RoboMaker Pro Kit comes with a variety of sample applications to allow developers to quickly test and demo various ideas. UP Squared RoboMaker Pro Kit also includes access to cloud extensions for ROS, allowing access to a greater pool of resources and community support to streamline development and tailor programming to the project’s needs. 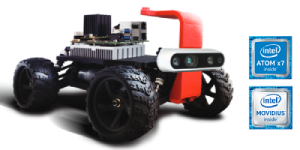 With the UP Squared RoboMaker Pro Kit, developers will have access to the tools needed to power real-world solutions utilizing AMR applications. These applications can be deployed in a range of tasks from warehouses, cleaning robots, autonomous exploration, military applications, intelligent security and more.

Many developers around the world, including schools such as Ben-Gurion University and Bar-Ilan University, are utilizing the UP Squared RoboMaker Pro Kit and OpenVINO to develop and train intelligent security AMRs.

“Inference applications can be used to teach a robot to roam a defined space and observe people for behavior patterns that may indicate suspicious activity,”

The security AMRs can be programed to either respond to behaviors directly, or contact security officers to review and act upon.

“We’re fortunate to have close collaboration with Intel and other organizations to be able to provide the versatile UP Squared RoboMaker Pro Kit for AMR and other robotics developers,” Cleri highlighted.

The highly regarded research division of a leading automotive and heavy vehicle manufacturer provided insightful research into AMR deployment utilizing Cogniteam’s AMR technology, with the experiments showing AMRs to be a time-saving investment. The experiment demonstrated the capabilities of AMRs in real-time prediction of possible future contingencies and decision making through its training program, helping to identify possible design issues before full implementation of the concept in the field. For example, an autonomous car could predict the motions of obstacles such as slow-moving vehicles, and either slow down or instantly plan a route around the obstacle. The testing program and POC allow researchers to identify any potential issues with safety-critical systems before scaling up, saving money and shortening development cycles.

“The UP Squared RoboMaker Pro Kit comes with vision computing hardware onboard, freeing the CPU for decision making, data processing, and building the world model of the robot in an optimized manner,”

Cogniteam is a technology start-up focused on autonomous control of robotics and interactive simulations, with a focus on becoming a world leader in markets requiring high levels of autonomy and intelligence.

Full-scale testing for deployment of AI edge computing applications require solid integration of software and hardware. Utilizing AMRs as an efficient tool to prototype can save a tremendous amount of time in development. Additionally, with the capacity to automate route planning, AMRs are able to realize the human-like capability of recognizing objects and enable AI simulation-to-reality. By leveraging UP Squared RoboMaker Pro Kit with the seamless integration of embedded systems and AWS RoboMaker service, developers can easily upgrade their PoC and scale to production.

The UP Squared RoboMaker Pro Kit combines technologies from Intel®, Amazon Web Services, and Cogniteam, to provide developers with an easy approach to creating machine vision applications for AMRs within a single day. The UP Squared RoboMaker Pro Kit combines technologies including Intel® Movidius® Myriad™ X and Intel® RealSense™ depth camera D435i, Cogniteam motor control board, ROS tools from AWS RoboMaker, and more to enable deep learning capabilities at the edge, powering intelligent tasks such as dynamic obstacle avoidance and path finding. Seamless integration of embedded system with AWS RoboMaker provides a vital tool to bring AI training from simulation to reality, helping to speed up development and reduce time to production.

UP Squared Board provides makers and developers with a high-performance, low power consumption embedded board built to power IoT and AI projects at the edge. Powered by the Intel Atom® X7-E3950 processor, with 4GB DDR4 memory and 64GB eMMC storage onboard, the UP Squared Board provides the capability to scale your RoboMaker project from proof of concept to full production, all on the same board.

Available Now
The UP Squared RoboMaker Pro Kit is available now through UP Shop. This ready to go AMR solution comes integrated with everything you need to get started, including all the parts and mechanisms needed to build your AMR, AWS software stacks, and Intel Distribution of OpenVINO toolkit. This all-in-one solution is available for $1,799 and can be purchased by visiting https://up-shop.org/up-squared-robomaker-pro-kit today.